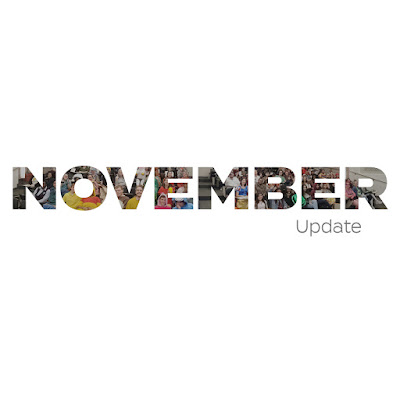 It seems like the months just keep flying by faster and faster. I really can't believe we have less than a month left of this semester. It has been a rather exhausting month for me overall. There have been quite a few decently rough ministry moments this month. Add that to what in campus ministry we have been calling the "October blues", and you get a less than stellar month. Nevertheless I am still filled with an unexplainable joy by the fact I get to minister to the students here at UNT. Which of course makes me so thankful for everyone who supports me, whether through finances or prayer. There are a lot of ups and downs of having to raise your own salary, but one of the huge plus sides is that in times of struggle you know you have an awesome team of people backing you up! Thank you so much for being that for me, you will never really know how much it means to me.

I found out UNT students go all out for Halloween. 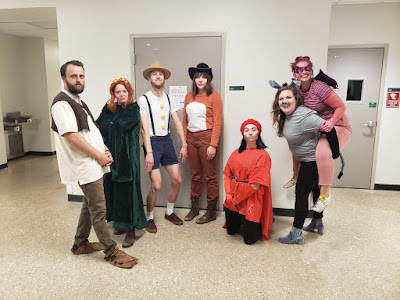 Thus our staff has to go all out (we're characters from Shrek).

I don't normally talk much about our sermon series, because as a campus ministry its not normally our main deal that we focus on. Most of our energy goes into 1x1 ministry and small groups, and for good reason. This month though I felt like the Lord was working a lot through the Steadfast series we are currently in. Steadfast is our theme for our year, and I think especially up in Denton it is hitting home with our students. There seems to me to be a blanket of gloominess that has settled over the city of Denton. Maybe I'm just making things up, but contrasting it to places I have been before, it seems that there is a much greater number of people struggling with depression, anxiety, and just overall drama in their lives. So I have been seeing this series we are in minister to so much of that. We are going over God's steadfast nature, and how that should be reflected in different areas of our life. I for example, got to preach on being Steadfast Amidst Change. So many students have been telling us how much this series is changing how they think about themselves and their problems. A common theme is that Jesus is our rock and foundation. He may not deliver you out of a storm, but rather through the storm. That is only possible with Christ at the base of your life. 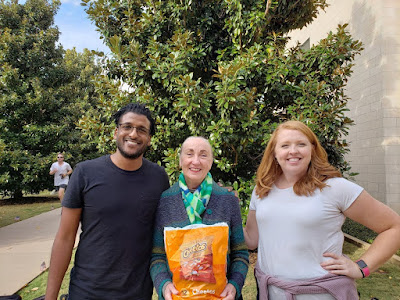 I didn't get a picture of Preston, so here is one of Mary Poplin (our Pizza Theology Speaker)

I just gotta brag on this guy for a second. I've been meeting with Preston ever since the beginning of the school year. He actually reached out to me and set up time (a rare thing for a college student to do). I have seen so much tremendous growth in him in the past couple weeks. He is giving everything over to Christ more and more. His desires, his priorities, his comfort, his money, and more. Every week he comes to our meetings with some new thing that God has been teaching him this week, and he is continually using that to go out and bless and minister to his fellow students. This week he even bought a fellow student an airline ticket to go to a family funeral. What a generous act for a college student! This is such a high potential guy, and I just can't wait to see what the Lord does with him.

One of the big things that has been going on this month is our outreach push. I'm actually in charge of outreach this year, and while that has been quite challenging for me, it has also been super exciting. We put on an event on Halloween day where we gave out hot chocolate, played games with people, and overall just tried to engage with the campus in conversation and meet some people. I saw a ton of our students getting the numbers of new people and having great conversations with them. The other thing that has been really cool is our 30 days of Mission push. We are giving our students daily outreach goals that start off rather easy and move to more intense versions of evangelism. We just started it this last week, so we will have to see how it has been going for them, but I'm super excited. I think it will hopefully train them to include outreach in their daily life, and train them to do outreach in a style that fits the workplace as well as the campus. 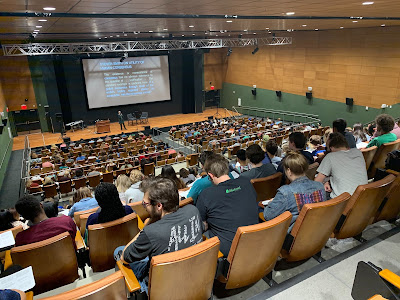 Our turnout for Pizza Theology, which is 4 hours of theological lecture

Keep Focus Growing is a fundraiser that we put on every year to make up for any shortfalls that FOCUS has. This year fundraising for our staff as a whole has been quite hard (something to definitely keep in your prayers). So we are facing what could possibly be a decent sized shortfall this year. That is where KFG comes in. Some of our generous donors have banded together and agreed to match up to $36,000 in total donations during this campaign. So if we receive $36,000 in total contributions, they will kick in a SECOND $36,000! Your first chance to give will be on giving Tuesday which is on December 3rd! We will be posting more about it as we draw closer, but it would mean a great deal to me if you would pray about and consider giving in any way.

That was a long blog, but a lot of stuff was going on! I really do see you as an integral part of what we do on these campuses, so thank you so much for helping us reach college students.

P.S. Checkout the student testimony below! Johnny is one of the guys that I get to meet with weekly!

Pray for the homeless population in Denton and discernment for us as to what our role there should be.

Pray for the upcoming Keep Focus Growing campaign and that we can raise enough to meet our shortfall.

Pray for those students struggling with depression and anxiety. 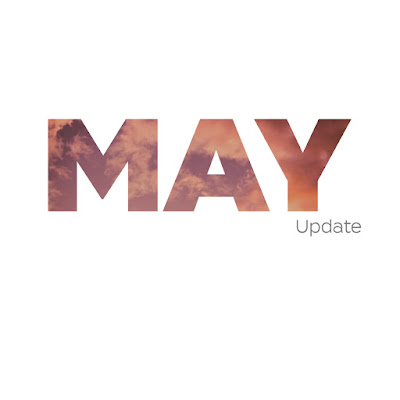